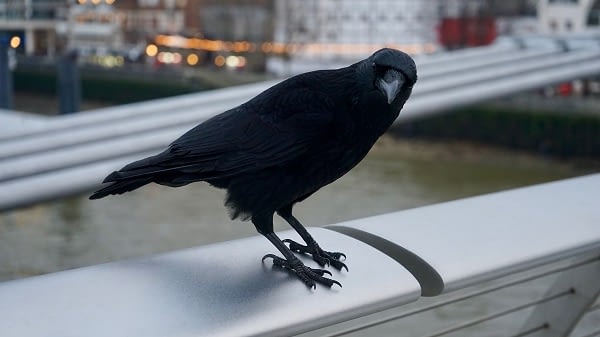 An enthusiastic backyard bird watcher named Stuart Dahlquist spent years leaving out food for a family of crows—but he never expected to be given anything in return for the snacks.

That’s why he was all the more shocked when he was surprised with a gift from the corvids back in March 2019.

Dahlquist told The Dodo that he had always delighted in listening to the baby birds chirp to their parents during feeding time—so when he went outside and found the tiny crows on the ground, he knew he had to help.

Despite the squawks of alarm from the adults, Dahlquist managed to scoop up the chicks and put them back in the nest. He even left out food and water at the base of the tree in case they fell a second time.

He then began regularly throwing bird food into his front yard—and the crows apparently took notice.

We’ve been feeding a small family of four crows (mated pair and their two year old kids) for several years. Last week two days in a row they left these gifts, pull tabs threaded onto pine twigs. This isn’t only generous, it’s creative, it’s art.
My mind is blown.

— Stuart Dahlquist (@StuartDahlquist) March 24, 2019
One day when Dahlquist was preparing for his daily feeding ritual, he was surprised to find a fir sprig that had been decorated with a soda can tab. Not only that, it was left in the exact spot where he fed the crows.

“I noticed it straight away because I’m kind of sensitive about trash going where it belongs,” he told The Dodo, “but the pull tab being threaded onto the sprig of fir wasn’t normal and I hung onto it.”

The next day, he was offered a second soda tab-decorated branch courtesy of the crows—and he says was stunned by the discovery.

Since his Twitter photo of the greenery gifts were shared several thousand times, Jennifer Campbell-Smith, a behavioral ecologist who earned her PhD studying crows at Binghamton University, told the Audubon Society: “I am very skeptical of random internet sources, but knowing these birds and how intelligent they are, I wouldn’t be shocked.

“It’s still an amazing example of the way crows are really watching us and are mindful of us—and, in their own way, [are] data mining for the best way to manipulate us,” she added

Regardless of the corvids’ intent, Dahlquist says he has maintained a close relationship with the bird family since the incident. Additionally, he told Audobon that he planned on getting a tattoo of the gift as reminder of his sweet inter-species friendship.

“They’ll follow along when I take my walks, landing on the wires along the way,” Dahlquist told The Dodo. “The adult male … is very amiable and will fly sometimes within a few feet, swooping by to say, ‘Here I am!’”

(If you want to learn more about the cleverness of crows, be sure and watch the jaw-dropping TEDx Talk below)