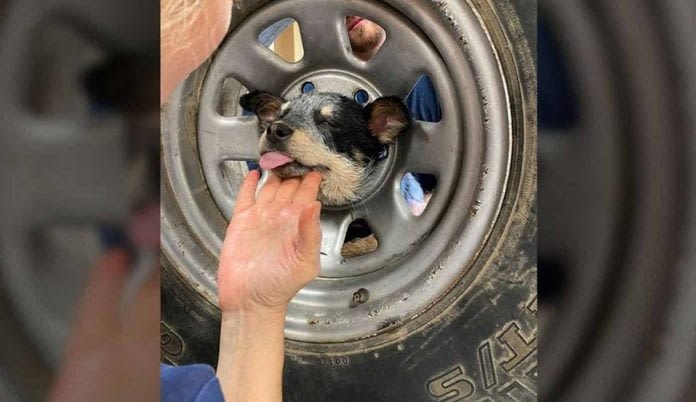 Firefighters and animal safety officers are being hailed for going above and beyond the call of duty to rescue a distraught 3-month-old Australian cattle dog.

Last week, Riverside County Animal Services responded to a call in Coachella, California about a young pup who had gotten her head stuck in the rim of a spare car tire.

At first, the rescuers attempted to slide the dog’s head out of the metal rim by lubricating her neck with oil, but her neck had already become too swollen from the wheel.

The rescuers then transported the distressed pup to the Veterinary Services Division of the Coachella Valley Animal Campus and calmed her down with a sedative.

For a long while, the firefighters took turns using a sawzall to cut a hole in the metal—until finally, they were able to pull the dog free.

“It was so worrying to me. I was trying to imagine how the heck she got put in that position and you just got to remember that puppies will be puppies. Just curiosity,” said David Hough, a Riverside County animal care technician, according to CNN. “There was probably food on the other side of it or something, she just crammed her head right through.”

Since publishing the video of the pup’s rescue to YouTube last week, it has been viewed more than 33,000 times.