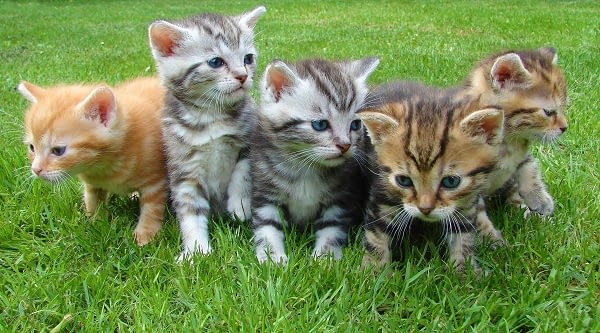 A Canadian oil worker is being hailed for using his leftover coffee to rescue three kittens he found trapped to a sheet of ice last week.

Kendall Diwisch had been performing some routine checks on the oil wells in Dayton Valley, Edmonton when he saw what looked like a piece of trash left on a sheet of snow.

Upon closer inspection, however, he was shocked to discover that it was a trio of terrified kittens whose tails were frozen to the ground.

Diwisch quickly fetched his cup of coffee from his pickup truck and used the hot liquid to sufficiently melt the ice around the kittens’ tails. After the coffee had done its job, Diwisch was able to pull the felines free and take them home.

Diwisch then posted photos and video of his ingenious rescue mission to Facebook in hopes of finding a forever family for the kittens.

“Took them home, fed and watered them; they look to be healthy and friendly,” he wrote. “If any friends are looking to have a new addition in their family, let us know as they will need homes. All three look to be males, and we also gave them dewormer.”

Since publishing his post to social media, Diwisch’s rescue video has been viewed more than half a million times. Not only that, he found a family to adopt all three of the cats.

“All three little rascals went to their new home today where they get to be together instead of separating them,” wrote Diwisch. “All three are eating and drinking and very energetic. Thanks for everyone’s consideration and offering to take them; very appreciated.”

(WATCH the news coverage below)